Thousands of metal marbles tumble through this wooden contraption by Swedish musician Martin Molin, which is operated with gears to produce different sounds and create tunes.

Molin and his team built the Wintergatan Marble Machine from birch plywood, wire and Lego Technic pieces, and incorporated a range of musical elements.

Spinning a handle on one side turns a rubber band that sets a series of giant cogs into motion. 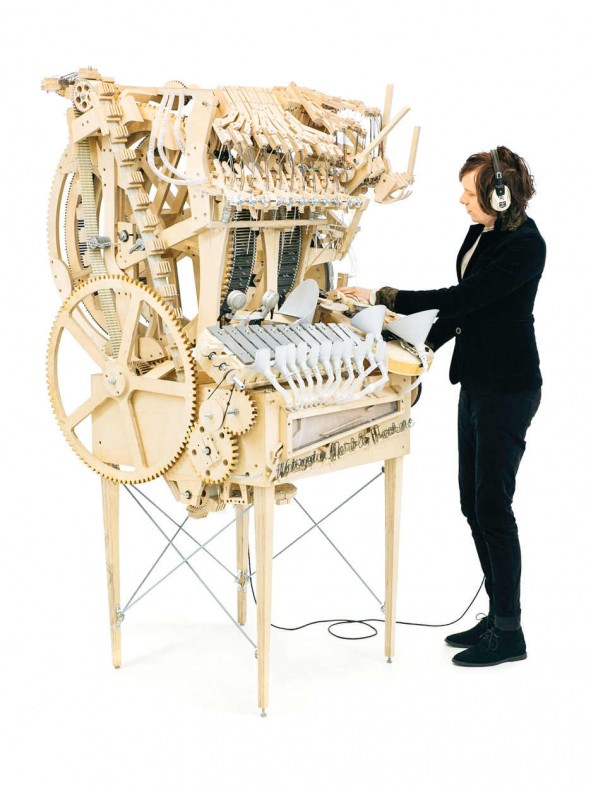 Marbles are transported up to the top in rows, then dropped onto a platform where the balls fall into multiple queues ahead of a series of plastic tubes.

As the metal balls flow down through the machine, different levers are used to alter their path.

«Marbles in groups behave like water, finding their way out of anything,» Molin told Dezeen.

Once the first lever is pulled, the marbles are released so they fall onto vibraphone keys in a specific sequence, creating a tune.

The timing of each release is dictated by a programmed wheel that rotates underneath.

A series of Lego pegs sticking up from the circumference flick the bottom of elements that hold the marbles in place, allowing one ball to pass each time. 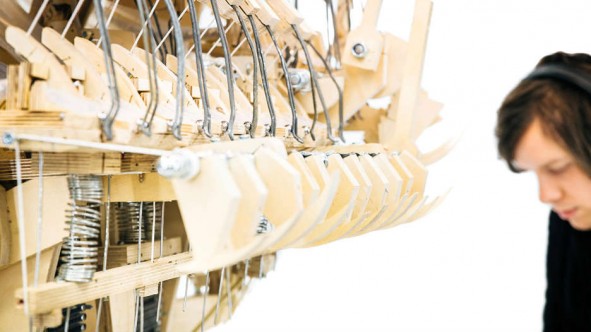 «The programming wheel is limited to a 32-bar loop, so the vibraphone repeats itself playing the exact same thing over and over,» said Molin. «So the trick was to make this more dynamic by altering the harmony using a new bass line on the second revolution of the loop.»

«I think this creates a somewhat captivating effect; a lot is happening but at the same time very little,» he added.

Activating another gear releases an intermittent stream onto a disk, which produces a snare-drum sound every time it is hit.

Other levers control bass, kickdrum, sizzle cymbal and hi-hat sounds. Molin activates and deactivates these when required during the song.

When they’ve made their sounds, the marbles are collected in funnels and channelled back into the complex system of wire tracks that eventually transports them back up to the top.

A certain points, the musician uses his hands to manually play the strings of a wooden bass guitar and freestyle with the vibraphone. The tune played by the machine was composed on a piano. 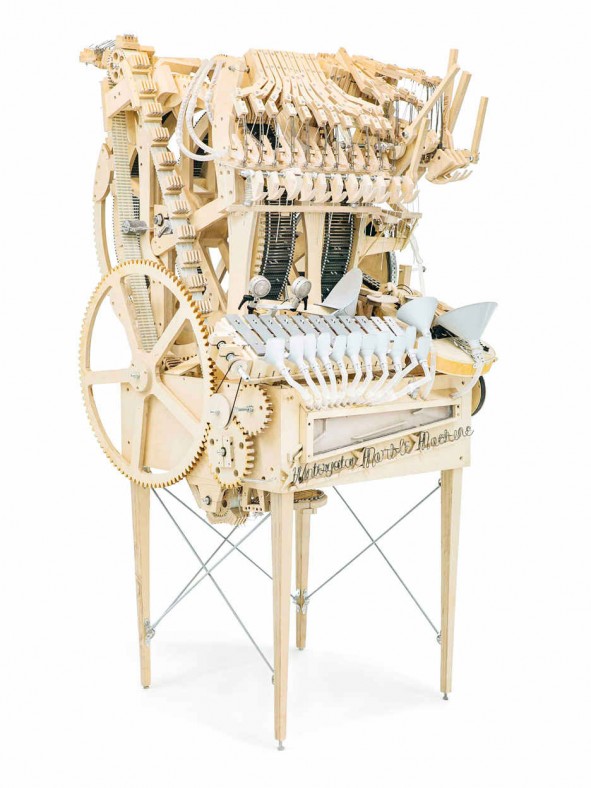 «We started with building the programming wheel, then I built everything around that,» he said. «We had to rebuild a lot!»

The project was influenced by Molin’s trip to the Museum Speelklok in Utrecht, the Netherlands, which displays a collection of automatically playing musical instruments.

He then stumbled upon a YouTube Channel set up by Canadian Matthias Wandels, which provides tutorials for making wooden gears.

«I always loved the Marble Machine subculture, and when I knew how to cut wooden gears I wanted to build this machine,» he told Dezeen.